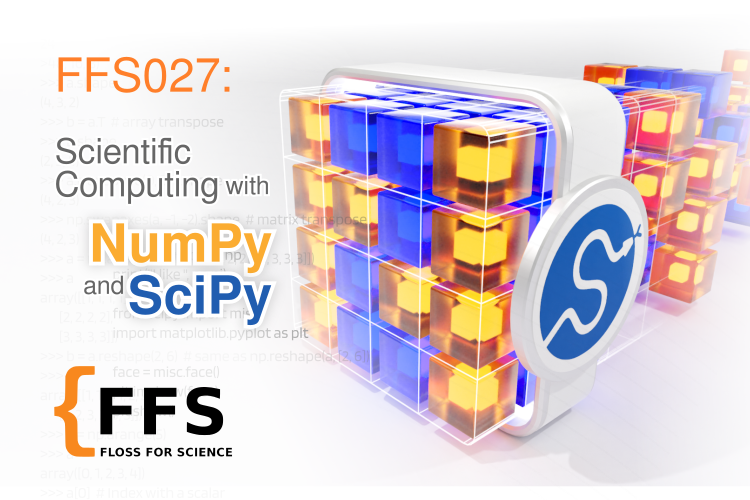 In episode 27, we interviewed Ralf Gommers from the NumPy and SciPy projects. We started our discussion by talking about his past research experience as a physicist and his transition to open source software and programming. This led him to get involved in projects such as PyWavelets, NumPy and SciPy. Following that, we had a great discussion about NumPy, its many features, its target audience and its performance. We learned why NumPy is not included in Python’s standard library and its overlap with Scipy. We also compared the combination of Matlab to NumPy and Python and how users could transition to this open source solution. We then had a brief discussion about SciPy and the features it provides. Ralf informed us of the positive results from Google’s previous Summer of Code and Season of Docs participations. We discussed how to reach the project and the many kinds of contributions that they are looking for. We talked about the importance of FLOSS for science and attribution of research output. We finished the interview with our classic quick questions and a reflection from Ralf about the need for more sustainability in open source software development as volunteer effort may not be sufficient in the future.

NumPy is the fundamental package for numerical and scientific computing with Python. It provides an N-dimensional array data structure and a large set of numerical functions that operate on it. Its array computing concepts – vectorization, broadcasting, indexing, and universal functions (ufuncs) – are used throughout the scientific Python ecosystem, and have also inspired similar libraries in other programming languages. The NumPy API and concepts have been adapted to other Python libraries, such as Dask and Xarray for distributed computing and PyTorch and CuPy for GPU computing.

SciPy is a library of numerical routines for the Python programming language that provides fundamental building blocks for modeling and solving scientific problems. SciPy includes algorithms for optimization, integration, interpolation, eigenvalue problems, algebraic equations, differential equations and many other classes of problems; it also provides specialized data structures, such as sparse matrices and k-dimensional trees. SciPy is built on top of NumPy, which provides array data structures and related fast numerical routines, and SciPy is itself the foundation upon which higher level scientific libraries, including scikit-learn and scikit-image, are built.

Ralf has been deeply involved in the SciPy and PyData communities for over a decade. He is a maintainer of NumPy, SciPy and PyWavelets, and has contributed widely throughout the SciPy ecosystem. Ralf is currently the SciPy Steering Council Chair, and he served on the NumFOCUS Board of Directors from 2012-2018.